Ibstone or Ipstone is a small Parish, now lying wholly in Buckinghamshire. A part of it, including the Church & Village, was transferred from Oxfordshire in 1895.  At the end of the 18th century, the County Boundary is said to have passed through the Parlour of the Manor-House.  The Parish covers 1,120 acres, which include 618 acres of Arable, 173 acres of permanent Grass & 318 acres of Woods & Plantations.  The usual slope of the land is between 400ft & 500ft above Ordnance Datum, rising to 705ft on Ibstone Common in the Northwest and falling to 300ft. in the South of the Parish.  The soil on the higher parts is Clay & Chalk with a subsoil of Flint & Gravel, and in some parts there is Sand.  The chief crops raised are wheat, barley and oats.  The Main Road runs down the centre of the Parish.  The Village, which lies along the Northern part of this Road and is scattered, contains a few houses of the 16th and 17th centuries, and in Lower Ibstone, in the extreme South of the Parish, are several more.

The Church stands on a Hill overlooking the Hambleden Valley about a mile to the South-west of the Village.  In spite of its commanding situation it is not easy to get a good view of Ibstone Church from any distance, since it is small and almost surrounded by trees.  On the North side of the spacious Churchyard is a notably fine Yew Tree many centuries old.  To the South-west of the Church is the Manor Farm, the property of Merton College, Oxford.

It is an early 17th-century house of brick & Timber, 2-Storeys in height, with tiled Roofs.  Much original work survives, including 2 Chimney Stacks with square Shafts. Internally some late 17th-century Panelling remains. North of the Church stretches Churchfield Copse with Parsonage Wood beyond.  The Rectory House, substantially built in 1857 of flint and red brick, stands on high ground to the North-West of the Village at some distance from the Church.  Near the Village on the South-east is Ibstone House, the Seat of Lord Summer (of the Court of Appeal of House of Lords).  It is a long, low stuccoed building of 2-Storeys, built probably in the 18th century, and stands more than 500ft above the Sea.  In the Garden, from which good views of the neighbourhood can be obtained, is a notable collection of Conifers.  The old Windmill on Copstone Hill, called Copsham Hill in 1633, gives its name to Mill Hanging Wood.

The following place-names have been found: Hartmore, a plot of land of 44 acres and a Messuage called Plumbridges, held by Augustine Belson of Brill at his death in 1616,  Surringes (17thC) and Hell Corner Farm (19thC), now Hill Corner Farm.

Manor
In 1086 Ibstone formed part of the King’s Lands allotted to Officials.  It had become attached to the Honour of Wallingford before 1300, when on the death of Edmund Earl of Cornwall that Honour reverted to Edward I, and so became part of the Estates of the Crown.  Although no specific reference to the connection of Ibstone with the Honour of Wallingford has been found after 1316, it continued to be held of the King in Chief, with the de Plessets or de Plecy Family as Intermediaries.

Ibstone Manor, before the Conquest, was held by Tovi, a Thegn of King Edward, who had the option of selling it.  Hervey, the Legate or Interpreter, as Mr Round suggests, Held it in 1086, when it was assessed at 2 hides.  He also held Land in Ibstone assessed at 2 hides under Oxfordshire, which did not render Geld or any other Service to the King.  Henry III Granted the Manor of Ibstone about 1270 to Walter Merton, Bishop of Rochester, for the Endowment of Merton College, Oxford.  This included land in Ibstone in both Counties, for in 1347 the College was permitted to hold in Free Alms half the Manor of Ibstone in Oxfordshire and half the Manor of Ibstone in Buckinghamshire.  Merton College obtained a confirmation in 1633 and holds the Manor at the present day.  Sir Christopher Willoughby, Bart, was Lessee of Ibstone in 1797 and his son Sir Henry Willoughby, Bart, in 1862.

The Ibstone House Estate probably represents the Property owned in Ibstone by Henry afterwards Sir Henry Allnutt in 1650.  Elizabeth, one of the daughters of his eldest son George, married James Clarke, and he sold part of the Estate about 1722 to Daniel Baker, who purchased it for his brother-in-law, Mr Faure.  Another daughter married Bartholomew Tipping of Woolley Park, Berkshire and she apparently inherited Ibstone House. It passed, with Cadmore End in Fingest, to Mary Ann Musgrave, niece of Bartholomew Tipping (ob.1798), who had married the Rev Philip Wroughton.  Their son Philip Wroughton of Woolley Park sold the Estate in 1860 to Sir Thomas Harte Franks, KCB, at whose death in 1862 it went to his Widow. Lady Franks gave it to her eldest son by a former marriage, Samuel Richard Brewis, who died in 1897. His Widow sold the Estate about 1908 to Mr Francis Wright, from whom it was purchased about 3 years later by the Owner, Lord Sumner later Viscount Sumner of Ibstone.

I remember parties at Ibstone House and being given home-made ice cream in the kitchen. Princess Margaret, other Royals and people in the literary world visited.

Dame Rebecca West DBE (1892–1983), described by Time Magazine as being “indisputably the World’s number one Writer” in 1947, purchased Ibstone House in the late 1930s and lived there with her Banker husband Henry Maxwell Andrews.  West, who had affairs with H G Wells, Charlie Chaplin & Lord Beaverbrook, used the grounds of the House as a small Dairy Farm and also housed Yugoslav Refugees in the blacked out spare rooms of the Manor during WW2.  After the death of her husband, she sold up and moved to an apartment next to the Iranian Embassy in Prince’s Gate, London. During the 1980 Siege there, aged 87, she had to be evacuated. The Nave dates from the early 12th century and retains detail of this period in the Chancel Arch, the North and South Doorways and the West window. In the succeeding Century the Chancel was rebuilt. Beyond the insertion of larger windows in the 14th & 15th centuries little appears to have been done to the fabric till the restoration undertaken in 1870 when the Chancel Roof was reconstructed and diagonal Buttresses were added to the Eastern Angles. The Framing of the Bell-turret is probably of the same date as the Nave Roof, which bears the date 1774 on one of the Tie-beams, and the Porch is a modern reconstruction.

The Chancel is lighted from the east by a triplet of 13th-century Lancets, with moulded rear arches springing from shafts with moulded Capitals and Bases attached to the internal Jambs. At the South-east is a square-headed 14th-century window of 2 trefoiled ogee Lights.  To the West of this is a small blocked Doorway with a pointed head and at the South-West a small square-headed Light, both probably of the 14th century. The Chancel Arch is semicircular and of one plain Order.  The Jambs and Abaci are not of the original work and suggest that the Arch has been raised. A carved Head has been built into the soffit of the Arch at the Apex.

In the North Wall of the Nave is a square-headed window of 2 Lights with 4-centred Heads, apparently a 16th-century insertion.  The only other opening in this Wall is the 12th century North Doorway, now blocked and concealed externally by the heating chamber. The head of the Doorway is formed by a straight lintel contained within an external round Arch, the Tympanum being ornamented by small lozenge-shaped stones. In the South Wall is a late 14th-century square-headed window of 2 trefoiled Lights with a small foliated piercing between their heads.  The work is coarse and has most probably been recut.  In the wall above it is set a carved head.  The South doorway has a straight lintel enriched with the billet and a plain round arch flush with the tympanum, which is filled with lozenge-shaped stones.  Internally the Head & Jambs are plain; the external Jambs with their chamfered Abaci are either modern or reworked.  At the West end of the South Wall is a small pointed Light with external Jambs & Head of brick. The opening may be an old one, but of what period it is impossible to say, the internal splays being covered with plaster. The West window is a small round-headed Light of original 12th-century date, but the Head & Jambs have been retooled.  The 18th century Roof of the Nave is supported by plain King-post Trusses and is covered externally with Lead. The walls of the Chancel are plastered; those of the Nave are of flint, roughly plastered, the South wall being covered with roughcast.
The Tub Font is probably 12th-century work, though recut.

The 4-sided Oak Pulpit, which is of the early 15th century, has 2 traceried Panels on each Face, separated by small pinnacled Buttresses.  The Panels have ogee Heads with Crockets, and the whole work is of an elaborate type. The Base, Stairs & Cornice are modern renewals.  A Staple in the Pulpit, to which a Bible was probably chained, retained the end of the Chain within living memory.

The Oak Communion Table is of the 17th century.
There are 2 Bells, both undated, but probably of the 18th century.
The Plate includes a Cup, with the date letter much worn, but apparently of 1619.
The Registers begin in 1665.
In the South-east Corner of the Churchyard is a Stone Coffin, now broken.

Advowson
The Advowson of the Church of Ibstone has always been appendant to the Manor (qv), with which it is held at the present day by Merton College.  The Church is stated in 1341 to have been Taxed £2 in 1291.  Its value in 1535 was £10.  The Rectory has been held with Fingest since 1841, having previously been joined to that of Cuxham, Oxfordshire, which also belongs to Merton College.  The Presentations are made alternately by the College and the Bishop of Oxford.  The Tithes of Ibstone had been commuted by 1862 for £170.  The Glebe Lands are worth £44 5s yearly.

There is a Methodist Chapel on Ibstone Common.
John Wesley recorded that he preached at Ibstone on 2 separate occasions in 1767 & 1769.  It was not until 1862 that a Methodist Chapel was Established which continued to be used as a Religious Meeting Place for approximately 100 years.  Local legend has it that an attempt was made to Build another Church on a new Site in Grays Lane, but the Devil objected to a Church being built on his Property so that the rising structure repeatedly fell giving that particular spot its present name of Hell Corner.

Charity
Ibstone has a share in the Charities of Henry Allnutt & John & Robert Baker, known as the Goring Heath Charity.  The Ibstone Church of England Elementary School is held by the Trustees, who pay premiums for Apprenticeship and provide outfits of Clothing. 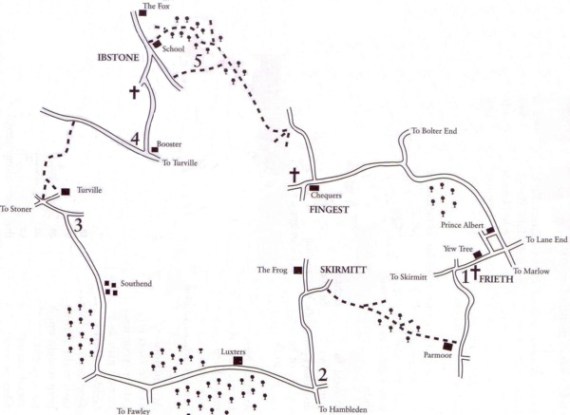