Stokenchurch (Stokingchurch in 14thC) is a large Parish on the Border of Oxfordshire of nearly 5,920 acres, including 2,427 of Arable, 1,215 of permanent Grass an 970 of Woods & Plantations.  The slope of the Land varies from 418ft above the Ordnance Datum (sea level) in the East of the Parish between Fillington & Barn Woods to 800ft near the Aston Rowant border. The Soil generally is stiff Loam or Clay, the subsoil Chalk. The chief crops are wheat, oats & barley.  Chairmaking for the London Market formed an important Industry & Bricks were formerly made here at Cadmore End, once part of this Parish.  The Village is situated in the North of the Parish on a lofty spur of the Chiltern Hills on the then Main Road from London to Oxford.  The original Road is now a Bridleway, called Colliers Lane (in original local dialect Colyers Lane); in the Valley to the North of Stokenchurch, had long been used as a Drovers‘ Road.    The Track was prone to flooding and, as a drier alternative, a new Path over the Hills through Stokenchurch developed.  This became the Main Road to Oxford and ran through the Village, down the Chiltern’s escarpment on what is now the Bridle Track to Aston Rowant at Westway Farm, and on through Church Lane to Copcourt & Tetsworth. the current Road having been constructed in 1824.  It was the use of the Village as a Stopping Point that led to many of the Pubs & Inns being established.

The earliest Turnpike Roads in Oxon were from Beaconsfield to Stokenchurch and from Stokenchurch to Woodstock (Turnpike Acts 1719) which included Wheatley (at milestone 48), Islip (milestone 56), Bletchington (58) & Begbroke (60) on the London to Worcester Main Road.  The Post Chaises & Carriers ran from London to Oxford.  Horses in the Village were used to meet the them at the Foot of the Dashwood Hill (the present Cutting was made in 1926), hitched to it and helped pull it up the Steep Hill. They performed the same Service at the Foot of Aston Hill on the return Journey.  The bottom of Dashwood Hill was said to be a haunt of Dick Turpin, and he is reputed to have lived in the Village at one time.

Stokenchurch has encroached to a large extent on the Common, proof of which exists in the Court Rolls in Mr H Clerke Brown’s possession, and also in the increasing difficulty of lack of Roads as approaches to the Houses, with the result that the Village Green was constantly being cut up.  When the Common was Inclosed in 1861 under the General Inclosure Acts its use was reserved for the annual Pleasure & Horse Fair on 10th & 11th July, to which Great Droves of Welsh Ponies & Irish Horses were formerly brought, though the number dwindled to a halt in later years.  The Parish was badly off for Water and there is only one well dug by Colonel Fane & Mr John Brown about 1870 after a Water Famine when Beer was cheaper than Water.  It later had its own Water Tower which has since been demolished.  The Church stands to the North of the Village and the Vicarage at a short distance to the South-east.  At each end of the Village was a Sawmill, and there was a Post Windmill to the South-west.  There are also 2 Schools and a Congregational and a Methodist Chapel.  About a mile to the North-east, standing in large grounds, is Mallard’s Court, the Property of the Executors of the late Rev Henry Tufnell Young and the residence of Mrs Flower.  Wormsley House, about 2-miles to the South-west, is approached through Beech Woods on 3-sides. It has belonged to the Scrope & Fane Families for more than 3-Centuries and was occupied by Mr Frederick William Fane c.1957.
Stokenchurch Parish Tithe Map 1842

Built 1736: last working Windmill in Bucks when blown down by a Gale in Spring 1926.Some 20-yrs earlier 2 of the 4 Sails had become detached; the then Owner had replaced them with 2 Sails of an unusual design.  These were considerably heavier than the former damaged Sails, which may have contributed to the instability of the Windmill which was located near Mill Lane.

For much of the 20thC a Transport Café to serve Lorry Drivers on the A40 London to Wales Trunk Road was located close to the Site of the Windmill. This was founded by William & Rose Dean. The early steam-powered Lorries needed to recharge their Boilers after the long climb up Dashwood Hill, and to do this they stopped at the Swilly Pond, which was near the Windmill.  The Dean Family lived nearby, Rose used to provide tea & cake to the Lorry drivers. The Family soon realised that there was a Business in this, which started as an act of kindness, and so acquired a ‘Coffee Stall’, what we today would know as a Mobile Café.  The Business grew, largely because Rose was such a good cook, so the Family erected a more permanent structure. The Café was at the front, with William’s Chairmaking Business at the rear.  The Café became known as the Swilly Pond Café, and then later as Blunt’s Café, named after their daughter who married a Blunt.  It was demolished in the 1980s, when the M40 diverted Traffic away from the A40.

There are a number of Houses about the Village Green and also at Horsley’s Green (a Hamlet about 1¾-miles South-east of the Village and just South of the London Road). These were probably built in the 17thCentury, but most of them have been a good deal altered and restored during later times.  Keynshams Farm, on Cadmore End Common, in the Southeast, dates probably from the 16thC, but has restorations and alterations of the 17th & 19thCs; Dell’s Farm, South of Horsley’s Green, is a building of about the same date re-Fronted in the late 17thC.

There are a number of Areas in and around the Chilterns containing patches of silty Clay, referred to as ‘Brick-earth’, which was used in small-scale local Brickmaking. Such Brickmaking Works existed in Cadmore End Common, where it was the Primary Industry until 1939 when the Clay ran out. Kensham Farm, Sadlers (once a Farm) and Huckenden Farm all show signs of having once been connected with Brickmaking.  One Kiln remains, and is a Grade II listed Building.  Although many other Buildings which were associated with 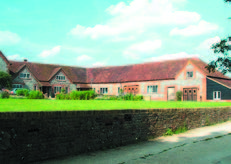 the Brickworks have disappeared, the Wage Office still exists and many small Ponds dot the Common indicating where Clay was extracted.  This Industry is the most likely influence on the growth of the settlement.  In addition to the Clay Pits, residents recall that Chalk was also Kensham Farm at the Western end of the conservation area extracted from Shafts dug on the Common.  Some of these are small and dispersed. Modern buildings are few as compared with older Buildings, although their grouping makes them more prominent than is desired. Enhancing the impression of remoteness is the M40 which cut through the area in 1978, severing Cadmore End Common from Cadmore End, leaving the primary access via Bolter End Lane.  Nearby Wheeler End was home to a group of Mummers until the mid 1900s. The word Mummer is derived from an old French word meaning ‘mask’ and refers to the local Acting Group which travelled to surrounding Villages to perform Plays in Pubs or Homes. The Wheeler End Mummers performed in the Winter months and rehearsed in the Brick Kiln at Cadmore End Common

The Hamlet of Water End lies over a mile to the Southeast of the Parish Church to the east of Saunder’s Wood.  Further on in the same direction is Beacon’s or Bacon’s Bottom with a School and Methodist Chapel.  Chequers Farm & Plantation are situated in the South of the Parish to the South of the Main Road from Marlow to Oxford.  For the purposes of Local Government Stokenchurch was transferred from Oxfordshire to Buckinghamshire in 1896.
OS Map Of Oxfordshire 1st Series
The following place-names occur: Pillisdisch 15thC; Sladys 16thC; Sowers & Stockfield 17thC; Pophley’s Wood & Farm 20thC.

During the Civil War the Inhabitants of Stokenchurch were largely “Parliament Men”, which is not altogether surprising given that the notorious Colonel Adrian Scrope, was a resident of Stokenchurch, and also a Churchwarden (1655).  Whether it is due to Scrope, or as another story has it, to Cromwell’s Chaplain John Owen who was also a resident of Stokenchurch, the Church did not suffer desecration at the hands of the Roundheads.  Scrope, himself was not so fortunate as he was Executed for signing the Bloody Warrant, on 17th October 1660.