Before the Conquest, Britwell was one of the Estates of Wulfstan, who also held Adwell and other neighbouring Manors.  By 1086 Miles Crispin had obtained it.  The Overlordship of Britwell Salome, therefore, descended with his lands and Britwell became a member of the Honour of Wallingford and subsequently of the Honour of Ewelme.  Thus, Tenants of Britwell Salome are found attending the Honour’s Courts up to the 19th century. 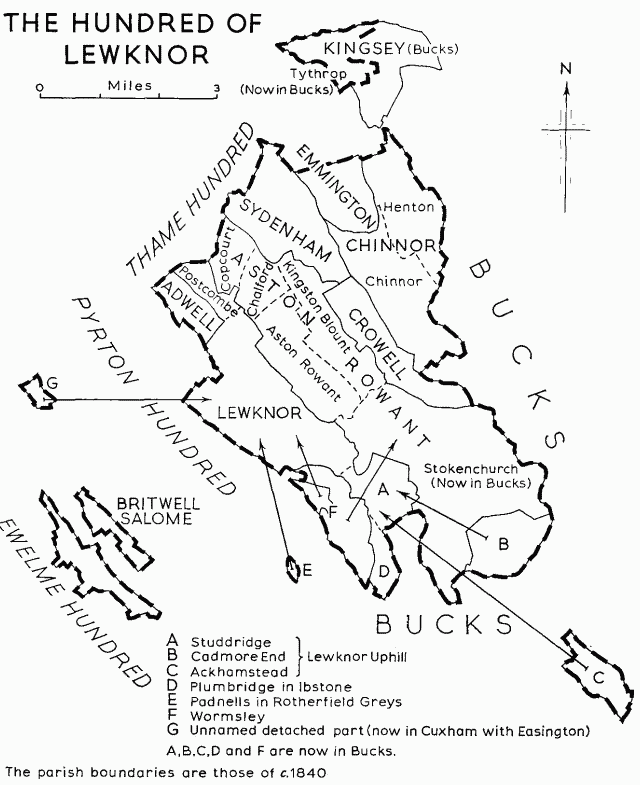 The Tenant of 1 hide at Britwell in 1086 was a certain William. He must have been the William who held Sulham (Berks) of Miles Crispin, together with many other Estates in Oxfordshire, Berkshire, and Buckinghamshire and was probably the Ancestor of the Sulham Family, which held Britwell in Demesne for 2 Centuries and gave it its 2nd name.  A certain Aumary, however, had the main Estate of 5 hides. There is little doubt that this Aumary should be identified with the Aumary de Sulham, who succeeded William at Adwell, Henton, and elsewhere. He may have been a son, who had been enfeoffed with a Fee at Britwell before his father’s death. William was still alive in 1104.  His successor Aumary died before 1130, after dividing his lands between his 2 sons. The elder son Ralph obtained 4 fees which included Britwell Salome, Adwell, and Sulham, the family’s chief Seat.  These 4 fees followed the same Descent, and Britwell was held for a ¼-fee by the De Sulham Family in the 13th century.  In 1272 John de Sulham was in possession and was granted Free Warren.  Britwell Salome was omitted from the Hundred Rolls of 1279, perhaps through some confusion with the Wallingford Fees in the neighbouring Brightwell Baldwin (‘Brictewell‘), but it clearly passed with John’s other lands to Richard de la Hyde and his wife Philippa and to Hugh de St Philibert. They certainly held Britwell Salome in 1285 when they claimed Free Warren there by right of John de Sulham.  The Manor was not long divided: in about 1290 Hugh de St Philibert Granted his Holding and the Advowson of Britwell Salome to John son of Richard de la Hyde in exchange for half Carswell Manor (in Buckland, Berks).  John de la Hyde soon gave up his interest, for Henry de Malyns, whose son was already Lord of the Sulham’s Henton Manor, appears to have been in possession by 1316.  In the following year John de Bassingbourne, probably a member of a Buckinghamshire Family, and his wife Christine released lands in Britwell Salome and Henton to the Malyns family, and in 1322 a John le Warrener Quit-claimed all rights in Richard de la Hyde’s Britwell lands, then held by Henry de Malyns.  Henry may have died shortly after in 1323, and his son Edmund contributed to the Tax of 1327.  In 1428 Reynold de Malyns (d.1431) was still returned as holding the Fee in Henton, Adwell, and Britwell. 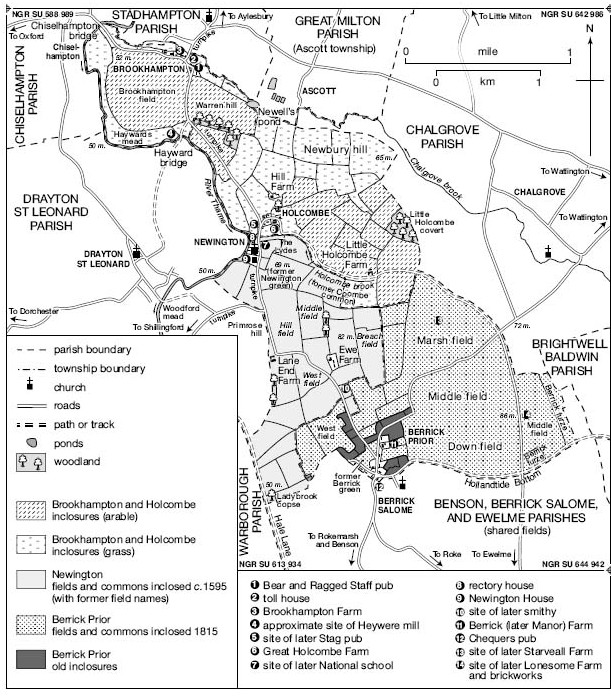 The Manor of Britwell seems to have passed permanently out of the Malynses‘ hands shortly after and appeared in the possession of the Cottesmore Family, who Presented regularly to the Church in the 15th century.  Amice, widow of John Cottesmore, the Chief Justice, and Matthew Hay (Heye), her 2nd husband, presented in 1443 and in 1453 Matthew Hay was called Lord of Britwell.  After the deaths of Amice & Matthew, the Manor must have reverted to the Descendants of Amice’s son John (II) Cottesmore, whose son John (III) Cottesmore was in possession in 1492.  John (III) Cottesmore was succeeded by his son William sometime after 1508,  and he held it at the time of his death in 1519 when John (IV) Cottesmore, the son of William and his 1st wife Elizabeth Bedwall, was his heir.  Cottesmore granted Britwell Salome and the neighbouring Brightwell Baldwin Manor to John Carleton, a Lawyer of Walton-on-Thames (Surr). John Carleton died in 1552, leaving Britwell Salome for life to his wife Joyce Welbeck, with Reversion to their son Anthony.  Anthony held it in 1563, but by 1571–2 he engaged in legal transactions which terminated in the Transference of Britwell Salome Manor to John Oglethorpe, who had married Alice Goodwin of Winchendon (Bucks), apparently the sister of Anthony’s wife Joyce Goodwin.  In 1578–9 John Oglethorpe was succeeded by his son Owen Oglethorpe, perhaps the one-time President of Magdalen,  but the Manor again changed hands before the end of the century.

In 1593 Owen Oglethorpe and his wife Jane (Perrot), with their son and heir apparent Edward Oglethorpe and his wife Ruth, sold Britwell Salome Manor and Advowson together with other neighbouring properties to Ralph Adeane of Britwell Salome.  Ralph died in 1608 and his eldest son John in 1614, leaving the Manor and Advowson to a son Ralph.  These were Granted by Ralph Adeane in 1636 to Edmund Gregory, the elder, of Cuxham, his son Edmund and their heirs as a marriage settlement on the younger Edmund and Mary Adeane, Ralph’s eldest daughter.  Mary Gregory died in 1639 and Edmund in 1673, after marrying Mary Edmonds.  By 1656, however, half the Manor had passed to Thomas Eustace of Pyrton,  who in 1681 settled a part share in it on his son Thomas at the time of his son’s marriage.  A Thomas Eustace and his wife Mary died in 1713 and it was presumably their half-Manor for which Thomas Stevens made fine with John Sale, Clerk, his wife Mary, and Elizabeth Hill in 1714.  Its further Descent is not clear unless it was the Manor of which James Stopes was said to be Lord in the early 18th century.  Stopes, who was Rector of the Church, made no mention of Manorial Rights in his Will of 1720, though he had land in Britwell purchased from Edmund Gregory.  By 1754 Edward Horne was one of the Manorial Lords and he may have been holding the original Eustace portion.  John Horne had succeeded by 1790 and a Horne still paid Land Tax in the Parish in 1832.  At the time of the Inclosure Award, the Family’s Manorial Rights were held by Edward Horne Hulton.  In 1864 they were held by Messrs Paine. 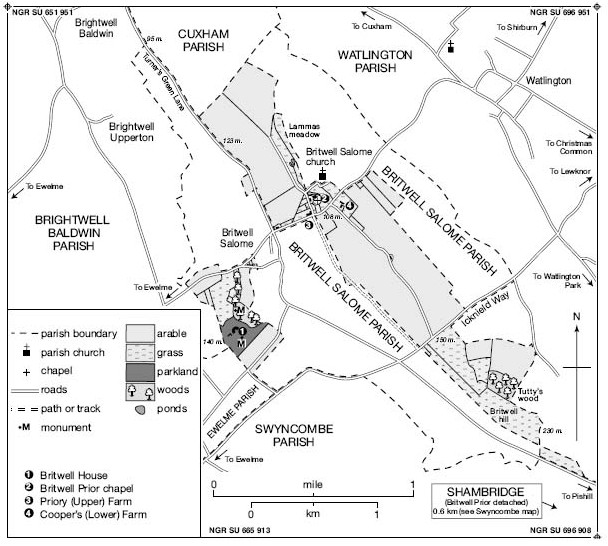 Another half of Britwell Manor, presumably the Gregorys’ 2nd half, can be traced in the 18th century descending through the Toovey’s of Shirburn, relatives of Edmund and Mary Gregory.  In 1736 Elizabeth Toovey, Widow of Thomas Toovey of Shirburn, married John Lydall of Ipsden, thereby giving him an Interest in her lands at Britwell Salome.  Later she conveyed certain Property in Britwell Salome and Shirburn to Thomas Reade of Uxmore (in Ipsden), probably a connection of the Lydall’s, who had a Seat there also.  In 1773 and 1774 the Tooveys, Reade’s and Lydall’s made an arrangement concerning their half of Britwell Manor, and in 1794 Elizabeth Lydall was said to be Lady of the Manor.  After her death before 1797 the Manor probably went to others mentioned in the Settlement of 1773, and after the death of Penelope Harriet Reade in 1825, John Reade of Ipsden was in possession of Lands and Rents in Oxfordshire.  In 1826 he made an agreement with another Claimant, John Dodd Lydall of Uxmore, by which half of the undivided half of Britwell Manor, otherwise Britwell Salome and Britwell Prior, and half of the lands held by John Reade were to be offered to a 3rd Claimant, John Reade Litchfield of Middlesex, and if he refused were to be held by John Dodd Lydall.  The other half of the undivided half was to go to John Reade.   The outcome of this Agreement is not known.  By 1842 the Manorial Rights had passed to Edward Horne Hulton and Richard Newton.  They still held in 1854, but by 1864 Messrs Paine held the Manorial Rights and continued to do so in 1903. The Manorial Rights seem to have lapsed by 1920.