Drove Herds grazed as they travelled – which is why a Green Road was preferred if there was the option.  The Icknield Way is a good local example, and there are historical records of Livestock movement along this Route. It doesn’t actually cross the Chilterns but goes around the edge of the Escarpment, which means that Drovers coming from the West could join it at various points and make their way to important Markets and Fairs at Leighton Buzzard, Harlow Bush, and various places in Essex (such as Billericay, Chelmsford, & Brentwood) and East Anglia itself.  On the other hand, deep-sided Country lanes were not Livestock-friendly on a long journey and were only for moving animals from Summer to Winter pasture, for example, or from one Field to another, not the sort of Route favoured by the Welsh.  The banks and high hedges left Drovers vulnerable and unable to fully control their Herd, especially if spooked by an obstacle of some kind.  Enclosed Spaces would have enabled Criminals to Target the Head Drover – and his Money Belt.

No – the Drovers would have opted for wide-open spaces and
the kind of thing we encounter along the pre-Turnpike Road between Buckingham and Aylesbury. Surviving examples of Green Roads in the Chilterns are rare – apart from the Icknield Way. Commons had Tracks and Cattle were able to spread out.  There is a lovely example of a Green Road – beyond the Chilterns (but importantly on the pre-Turnpike Route between Buckingham and Aylesbury).  It is between East Claydon and Botolph Claydon.  (see John Sellars’ Map
of 1693 and Robert Morden’s Map of 1701).  The modern Lane has a 3-hedge system, a Road for Traffic which is divided by a middle hedge from a Green Road, running side-by-side for a couple of miles.  The Icknield Way is Wide and Green and the obvious example as G R Crosher, in Along Chiltern Ways (1973) mentions that the Catherine Wheel Pub in Crowell had a lean-to in the 1960s, said to have been used by Drovers stopping for the night. It may even have been used by Packhorse Teams travelling along Colliers Row/Lane. 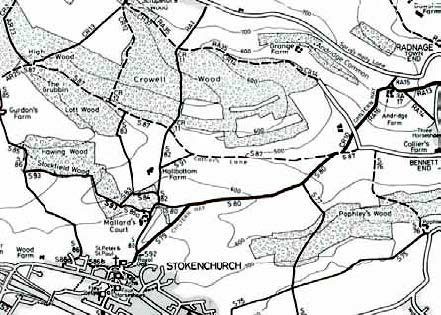 What the Chilterns do provide are odd bits of Green Land which can be picked out on old OS maps, or Bryant’s Map of Buckinghamshire, Roads that may appear to fit the description of possessing what is known as Manorial Waste – patches of Common Land that would have been used as Wayside grazing spots.  One such route is Park Lane – situated at the top end of West Wycombe Parish.  Lane End, a stone’s throw away, was in turn at the head of the long narrow Parish of Hambleden.  Park Lane runs like a wide and swollen Green Lane as far as Booker Common on the old Maps and has a clear association with the movement of Livestock (local or otherwise).  Chorley Green appears to be another section of Manorial Waste, on the narrow Valley Bottom Road between Radnage and Chorley Farm (just outside West Wycombe).  A pre-Turnpike route probably ran along this Lane to Bennett’s End where it joins Collier’s Lane (part lane, part Bridleway) to Crowell Hill and the Vale via Sprigg’s Alley.

A more obvious piece of Manorial Waste can be seen between Wycombe and Hazlemere (on various OS Maps, Bryant’s Map, and Maps seen by the Author in the Offices of Hazlemere Parish Council which are on a much larger scale). It runs along the Parish Boundary of Wycombe and Hughenden, up to the upland zone of what was Wycombe Heath (basically an area bounded on one side by Kingshill and Spurlands End, with Tylers Green on the opposite side).  At the Hazlemere end it is still known as Green Street (see map) and as it goes down the Hill into the Valley at Hughenden, it is still known as Green Hill, with Green Farm to one side. The old Road can still be seen, now mostly a strip of Woodland.

The Road was still in use up to the 1960s (when a housing estate was built to one side). This was primarily a Green Road used by locals to take Livestock to Summer Pasture – but it could have been used by Drovers coming from the Downley Common direction.  It can also be seen as Manorial Waste or Common Land as there are the remains of 2 Quarries at the top of Green Hill, and the section between Green Hill and Hazlemere had an extensive Brick Field that developed into a Brickworks, now covered in housing.  We can see that Waste is often located on Parish and County Boundaries – but why?  It may have had something to do with the idea of a sort of no man’s land where Parochial responsibilities were suspended. In other words, these areas were sometimes regarded as ‘beyond the pale‘, an area at the edge of the Parish where the Poor, the Disabled, and those with learning difficulties were shunted, neither in one Parish or the other.  This allowed the Parish Church and local Worthies some breathing space – they didn’t have to provide them with Sustenance or Alms. The important point is that such areas could have been free of Common Rights, and Tracks and Lanes through them would not entail paying Levies to Landowners or treading on the toes of Commoners jealously guarding their Rights of grazing, a sort of perfect Seasonal Droveway.  This idea may account for road names such as Beggars Lane and Bulbeggars Lane (between Tring and Hemel) – but only if they define early parish boundaries.  Bulbeggars Lane is an interesting one as it comes down from Berkhamsted Common via Little Heath (with an isolated pub) to Bourne End (on the Bulbourne) and Boxmoor (riverside pasture that was common land). Beggars Lane is between Cow Roast and Tring station – but the area here has been subject to enclosure changes.
The name Cow Roast is almost certainly a corruption of the name “Cow Rest” indicating a place where there were pens and grazing to rest cattle being driven to Market. The Hamlet lies on an Ancient Drovers Route through the Chiltern Hills towards London. 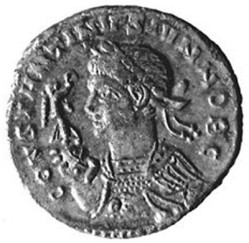 Nearer at hand, behind the Cow Roast Inn on the London Road, lie the remains of a Roman Settlement that extended to the Hillside on the opposite side of the Main Road (A4251), beyond today’s Canal Marina.  Over the years this Site has yielded many valuable finds.  As early as 1811, the Gentleman’s Magazine reported the discovery of coins & a gold ring, and other items such as military artefacts, pottery and jewellery have been found over the years.  Later excavations uncovered 14 Well Shafts, which together with other finds suggest that the site was used for the production of Iron.  In addition to Roman remains, there is evidence on the site of an earlier Iron Age settlement.

Downley Common (on the border between the old Parish of West Wycombe and that of
Hughenden) may even fit that Bill to some extent as there are extensive Clay Workings there and evidence of Kilns and even a former Pub, the Brickmakers Arms (situated on the Common side).