Tinghurst, Tynhurst (11-13thC); Tyngehurst (14thC); Tingerst alias Fyngerst or Fingest (16-18thC).  The Village name of Fingest comes from the Anglo Saxon name Thinghurst, meaning ‘wooded hill where assemblies are made‘. In the 16th century the name is recorded as Thingest and then Fingest.  Although the early name is the etymological root of both ‘Tinghurst’ & ‘Fingest’, the latter doesn’t follow the former by any normal linguistic line.

Fingest is a small Parish on the Oxfordshire Border, having an area of 1,284 acres, of which 570 acres are Arable and 418 Permanent Pasture.  The ground lies high, the slope ranging from over 600ft on the Ridge in the North-East of the Parish along which runs the Road from Great Marlow to Oxford in the South-West.  The Parish is well-wooded, containing some 206 acres,  Hangar in the East, Fining & Muzwells Woods being the principal Woods. The Soil is principally Chalk, Pits of which have been worked in the Parish. The Chief crops are wheat & oats.

For the Explorer who has plenty of time on his hands, there are many pretty Villages in this Thames Valley just away from the River which are worthy of attention. Ibstone with its Norman & Early English Church, Turville which has also a Norman Church, Fingest where the Bishops of Lincoln had a Palace and Hambleden are all worthy of a visit.

The Village of Fingest is Picturesquely situated in a Hollow in the South-west of the Parish surrounded by Steep Hills covered with Woodland.  It consists of the Church of St Bartholomew at the North of the Village, with Ruins of the old Manor-House of the Bishops of Lincoln nearby, and of Fingest House, once the Residence of Mr A P Barnett, with a few small houses adjoining. 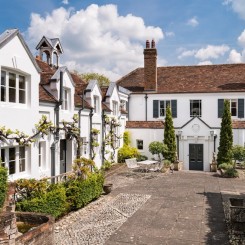 Fingest House is actually in Hambleden Parish, though the Grounds are in Fingest.  The Old Rectory is now used as the Glebe Farm, and the Manor Farm, which includes part of an older building, was the residence of Mr Thomas E Collier. To the South-east is Bolters End, an outlying District, with it’s Common and a few scattered Farms, among which Fining, with its early 17th-century house of timber & brick, Priestly’s, and Bolters End Farms may be mentioned.

Cadmore End (Cademere, 13thC; Cadmer End, 16thC), which since 1852 has formed a separate Ecclesiastical Parish, lies along the Northern Boundary. It is the most populous part of the Parish and has a Common of some extent.  Brick & Tile-works were found here, whilst in the South of the Parish were more Brickworks and also Clay-pits. They closed in the early 20thC.

Manors
There is no mention in the Domesday Survey of Fingest Manor, which is said to have been Granted, together with the Church & Tithes, to St Albans Abbey during the Abbacy of Richard Daubeny (1097–1119).  Fingest was retained by the Abbey until 1163, when, on the termination of a long dispute between the Abbot and the Bishop of Lincoln, who claimed Rights of Episcopal Jurisdiction over the Abbey, the Estate was Granted to the Bishop in return for the renunciation of his claims.  The Bishops of Lincoln, who are said to have occasionally resided here, held this Manor together with Wooburn, of the King in Chief for 1½-Fees in the 13th & 14th centuries.  It remained attached to the See of Lincoln until 1547, when Bishop Henry Holbeche obtained Licence to alienate the Manor to Edward Duke of Somerset, the Protector.  In the following year the Duke, in his turn, obtained Licence to alienate the Property to William Thynne, Prebendary of Dultingcote in Wells Cathedral.  This Licence was renewed 2 years later, and in 1551 the Duke finally completed an exchange by which he received the Corps of the Prebend of Dultingcote in return for Fingest.

The Manor was retained by successive Prebendaries until the middle of the 19th century when it passed to the Ecclesiastical Commissioners.  It has been usual from the 16th century onwards to lease the Manor for 3 lives, the Leasehold remaining in the same Family for many generations.  Thus from the early 17th century, the Manor was held by a Family of the name of Ferrers alias Turner.  In 1646 Thomas Ferrers, described on his Monument as ‘Lord of Fingest Manor,’ died leaving 2 sons, Thomas &

John, and 4 daughters, Mary, Elizabeth, Nathany & Deborah.  Mary Ferrers, his Widow, in 1650 resigned to James Sale her interests in the Lease, which was held at this time for the lives of William & Thomasine Ferrers, Parents of the above Thomas, and for the life of his son Thomas. The Rent was at this date £22.  Thomas Ferrers, Jr, held the Lease in 1656,  and according to Lysons, the same Family were holding the Manor as late as 1737.  Thomas Dorell appears as Lessee in 1780, and the Lease shortly after passed to Thomas Williams of Temple House, Bisham, in whose family it has since remained, the Trustees of the late Lieutenant-General Owen Cope Williams being the present representatives.

A 2nd Property in this Parish was known from the 16th century as Cadmore End Manor, and doubtless originally formed part of Fingest Manor. It was situated in a Hamlet of the same name, of which mention is 1st found in 1235 when Henry de Scaccario conceded the Right of Roger de Scaccario to half a hide there.  Simon de Scaccario, their descendant, held lands here of the Bishop of Lincoln in 1292, when he died, leaving his 3 sisters, Maud wife of John de Doggeworth, Lora wife of William Payforer, and Beatrice wife of John Peverel, as co-heirs.

The so-called Manor 1st appears in the 16th century in the possession of the well-known Berkshire Family of Unton.  Sir Edward Unton, the 1st Holder of whom mention has been found, had married in 1555 Ann Countess of Warwick,  daughter of that Duke of Somerset who had held Fingest Manor (qv) for a short time; so it is possible that it was by this marriage he acquired Cadmore End, formerly part of the Fingest Estate.  Sir Edward Unton died in 1582, and by his Will, dated 2 years previously, he left his ‘Lands & Tenements‘ at Cadmore End to his son Edward. In 1586 Edward Unton was Granted Licence to alienate Cadmore End ‘Manor’ to Sir Thomas Wroughton, the father-in-law of his brother Sir Henry Unton.  Together they made a further Settlement on Basil Fettiplace in 1589, possibly on behalf of Sir Henry Unton, who 2 years later made a final alienation to various members

of the Tipping Family.  In 1601 Thomas Tipping died Seised of Cadmore End, which passed to his 2nd son Bartholomew.  In 1650 Bartholomew Tipping, son of the above Bartholomew, together with his sons Bartholomew & John, made a Settlement of the Manor, apparently in favour of John, the younger son, whose descendants are henceforward found holding. Bartholomew son of John Tipping suffered a recovery of the Manor in 1703.  He was succeeded by a son Bartholomew, whose son also Bartholomew died without issue in 1798 when Cadmore End passed to his niece Mary Ann Musgrave, wife of the Rev Philip Wroughton.  The property was sold by their son Philip Wroughton of Woolley Park in 1860 to Thomas Taylor of Aston Rowant House, whose interest passed to Lord Parmoor of Frieth, KCVO, the recent Owner.

In 1285–6 Oliver, Bishop of Lincoln, claimed View of Frankpledge in Fingest Manor.  In the 16th century, Views of Frankpledge & Courts Baron were held here.

In 1330 Henry de Burghersh, then Bishop received a Grant of Free Warren in his Manor,  and also Licence to impark his Wood with 300 acres of land adjoining.  This encroachment on the Common Lands was the cause of many complaints, and the story is related that after his death in 1343 the Bishop appeared to one of his Gentlemen in the dress of a Huntsman, and said that as Penance for the suffering which his encroachments had caused he was doomed to act perpetually as Keeper of the Park until restitution was made. He begged that word might be sent to the Canons of Lincoln, one of whom was accordingly dispatched to Fingest, and under his directions, the Hedges were broken down, the Ditches filled up, and, it is to be hoped, the Ghost Laid.  This story is possibly founded on fact, for, as appears from evidence given regarding the assessment of Fingest for Taxation about this date, the Bishop certainly did Inclose Common Land, and Delafield, writing in the late 18th century, says that traces of high Banks and a deep Ditch known as the Park Ditch were still to be seen, while parts within the Inclosure were still Common.