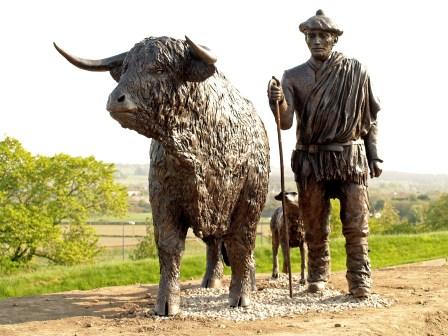 Between 1600 & 1870, a Period of continued low temperatures in Europe and North America led to the term Little Ice Age.  Excess rain led to grain rotting in the Fields and lower Temperatures resulted in a shorter growing Season, thus leading to poor harvests & famine which mostly affected the Poor.  In the 18thC, exceptionally bad weather in Scotland, particularly in the 1740s, gave impetus to the Jacobite Rebellion (1745), which was followed by the Highland Clearances.  Landowners removed Crofters from their lands and replaced them mainly with Sheep, having reached the conclusion Arable Agriculture was marginal.

However, Highland Cattle were unaffected by the weather and the Drove Trade changed gear and became even bigger than before, due to the increase in Sheep numbers.  Livestock was brought to the Falkirk Trysts (ie Markets) from the Islands and the Highlands prior to being taken South.

The Drovers might strike the people of the lowlands they entered as strange and perhaps threatening. “Great stalwart hirsute men, shaggy & uncultured and wild, who look like bears as they lounge heavily along.” as one person described them at the time. But they were greatly skilled. Listing the necessary attributes of a Drover, A R B Haldane, who

made a special study of the Drove, lists the attributes they had to have as: extensive & intimate knowledge of the country endurance and an ability to face great hardship knowledge of cattle resource, enterprise and good judgment honesty and reliability for responsible work that was entrusted to him  – The Drove Roads of Scotland, David & Charles 1952
In addition to that, they were also often skilled on the Bagpipes or learned in other aspects of their Gaelic culture.  As a people, they should never be underestimated.  The Drovers would arrive finally with their cattle in specific Scottish Towns like Falkirk or Crieff where they would sell their cattle to others who moved them to places like the grazing areas of Northumberland or the Yorkshire Dales, both in Northern England.  There they would be grazed & fattened after their long journey before being driven further South to the London Markets.  For nearly 200 years, through the 2nd half of the 17th century, throughout the 18thC and into the early 19thC, Droving flourished aided by a growing human population and hence demand and other factors. Between 1727 & 1815, for example, there was a long series of Wars with Spain, Austria, America, France and, finally, the Napoleonic wars.  This meant a large Navy had to be maintained.  Salted Beef was a major Foodstuff for the Navy, which was thus a major Market. In 1794 for example, the London Meat Market of Smithfield recorded 108,000 cattle arriving for slaughter and at least 80% of these came from Scotland.  But times were changing and Droving would go into decline.

A similar situation prevailed in Wales and the West Country.  Pasture was poor on the Welsh Hills and the Cattle were small in comparison with English Breeds. They were known as runts, but their saving grace was hardiness.  Over the course of the 18th & 19thCs, the Welsh Blacks were improved, doubling in size and weight to accommodate the needs of the Meat Market.  The weather played a role in the expansion of the Drove Trade.  Hill Farmers have a reliable resource, their Grass. However, even the quality of the Turf suffered during cold & wet weather – which shortened the growing season. 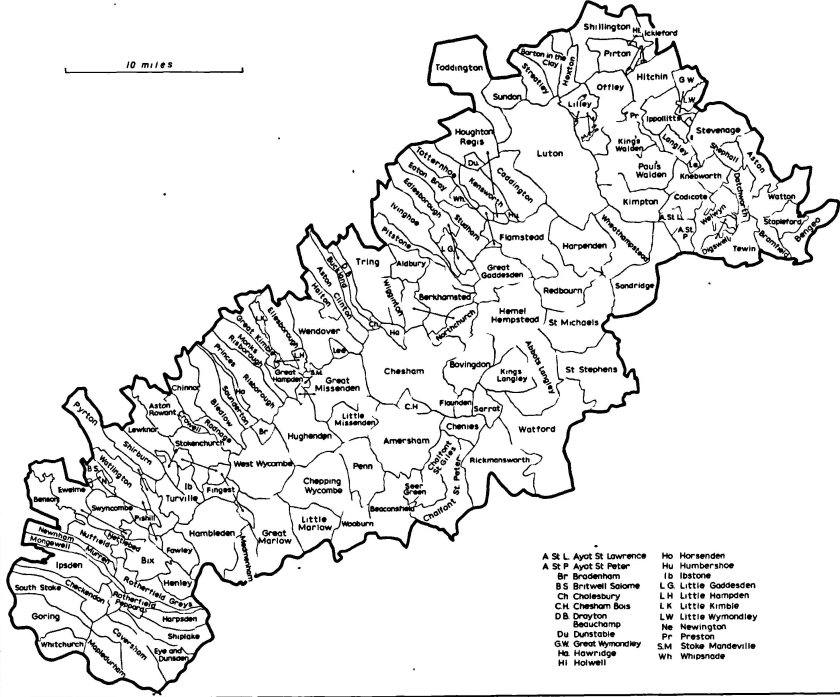 In contrast,  the grass remained lush across the Midlands and in the Home Counties, including East Anglia. This led to a completely new economic activity, the Fattening Trade, and Fortunes were made.  It also meant the Welsh and the Scots did not always have to go to London but could dispose of their animals prior to coming anywhere near Smithfield.  Instead, they came to the Fairs which were held on a Seasonal basis. Animals Fattened in the Home Counties, including the Vale, could be brought to London 52 weeks of the year and a Subsidiary Droving Trade emerged.  The Account Books of one such Drover, Lee Henry Uff, are held in the Centre for Buckinghamshire Studies in Aylesbury.

The Passing of the Drovers
The peace, after the Battle of Waterloo in 1815 finished the Napoleonic Wars, meant the shrinking Navy needed less Beef but other changes were even more important.  The 1st half of the 19thC saw a revolution in Agriculture.  Enclosed systems of Fields replaced Open Common grazing and large, fatter cattle were bred and raised ready for Market.  More importantly, by the 1830s, faster Steamships were being built and farmers in the Scottish Lowlands and elsewhere started to Ship cattle directly to the Southern Markets instead of by the long arduous overland Droves.  Then, once Railways were established by the 1880s, this provided an even swifter and more reliable means of Transporting cattle and other Agricultural products to Market.  The Trade died steadily. Droving days were over and a watcher at the Bridge would have seen a different kind of passerby.   In 1775 following the Highland Clearances the Scottish Drovers decamped to America en masse and mixed with the fellow Spanish Drovers and evolved into the now legendary American Cowboys.