Lacemakers used Silk or Cotton Thread, a Pattern pricked from a Parchment Template, Brass Pins and lots of skill & practice to make fine Patterns that appear within a regular mesh known as the Ground.  Protestant Refugees from Mechlin in Flanders & Lille in France between 1563-1568 & 1572 are credited with bringing Lacemaking to England & especially Buckinghamshire.  ‘Bucks Point’ Lace incorporates Mechlin or Lille designs on a Lille Ground.  By 1791, the Universal British Directory recorded Amersham as the Centre of Black Silk Lace production. It specialised in fine Silk Veils and wide flounces of Black Lace that were used to decorate white dresses. Hand-made Bobbin Lace was eventually replaced by Machine-made Lace and now only a few enthusiasts can reproduce the original intricate Patterns.

Lace was probably made in the Eastern Counties (Buckinghamshire, Bedfordshire, Northamptonshire) prior to 1563.  This was, and still is, a Flax growing area. The 1st wave of Lacemakers from the continent came in 1563 to 1568. They were Flemish Protestants who left the area around Mechelen (Mechlin / Malines) when Philip II introduced the Inquisition to the Low Countries:

The 2nd Wave of Lacemakers, many from Lille, left in 1572 after The Massacre of the Feast of St Bartholomew.  Exactly how many is not known but many 100’s came to Buckinghamshire & Northampton. From this time Bucks Point Lace developed: it is a combination of Mechlin Patterns on Lille Ground.  In 1586 Lord William Russell, son of the Duke of Bedford, owned property near Cranfield, Bedfordshire.  This is about 10-miles from Olney. He had fought for William the Silent in the Low Countries and he was married to Rachel, daughter of the Huguenot Marquis de Rivigny.  He invited many refugees to settle under his protection.  Another English gentleman, who had fought for William of Orange, was George Gascoigne: he invited other Huguenots to settle near his Manor at Cardington, Bedford.  Huguenot emigration continued untiI the Edict of Nantes in I598.  However when the Edict was rescinded in 1685 by Louis XIV, there was another wave of Religious Refugees.  About 10,000 left Burgundy & Normandy.  The Lacemakers found their way to the by now well-established Lace Villages in the Counties of Buckingham, Bedford & Northampton. Flemish & Huguenot names still common in this area; naturally most have been Anglicised over time. 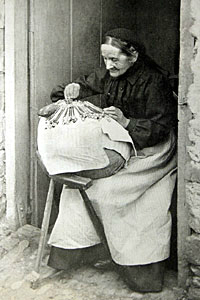 Lacemaking has changed from being a Craft Industry that supplemented the income of Families of Agricultural Labourers and provided Employment for Workhouse Inmates into a gentile pastime for Ladies.

The ideal place to make Lace is Outdoors, it is the best light. In the summer the women would sit on their Doorsteps and work at their Pillows.  In winter the light was either a dim oil lamp or, more often, one candle. Sometimes the candle was aided by a glass bottle, round, filled with water, called a Candle Lamp and this would magnify the light. One of the Lacemakers told me that they used to meet in each other’s Cottages in turn to work, and so save fuel. Each would take along a pinch of Tea Leaves as a contribution to the “Brew”. How I should love to have been present on one of those afternoons listening to the lovely sound of 100’s of Bobbins clicking and the tongues going in broad Bucks telling the local gossip.  I remember Mrs. Harris’ brother talking about his mother who was a great Lacemaker.  He said “we got so tired a-earing her a-clicketting they Bobbins”. He also said “I used to watch her a-wickering they Bobbins round they Pins I never knew how she kept they straight. She’d just push one bunch back and grab another lot, she never seemed to stop to look”.

Watching a real Lacemaker at work is wonderful, her left hand is continually moving Bobbins, back, forth, over, under whilst her right sticks in the Pins.  The rhythm of the clicking Bobbins never ceases until a thread breaks or a Bobbin runs out. It is a quite unforgettable memory, the Music of the Bobbins, and sad to say, a lost joy for a modern worker cannot get the same rhythm. Only those who learned at the age of 4 or 5 and worked on for 70 or 80 years could get that unforgettable Music from the Bobbins.

Traditionally, Lace Buyers organised the Supply of Materials, Payment of the Workers & Sale of the Goods.  Lace Schools were established to teach complicated Patterns to children. At 1st the children paid the Teacher but when proficient, they were paid for the Lace they produced. Lacemakers have been affected by Politics & Industrial innovation. Charles I banned Imported Lace in 1635 giving a boost to Home Production, and Smuggling from Flanders, but this was soon reversed when Cromwell’s Puritans discouraged the wearing of Lace.  After the restoration of Charles II and throughout the 18th & 19thCs, English Lace was worn by everyone, including Royalty & Babies, to adorn their clothes, fans, shoes & even night caps.

To be skilled in the making of Lace meant that an income was assured for Life, and the Girl or later in marriage, Woman, would not be a drain on the local Community.   Started by the Huguenots, the Lace Schools taught the young children very little other than Lace Making and tiny children paid a fee of about 3d a week for Training.  No numeracy was included, only Bible Studies and only a few could sign their names.

The need for Light to see the crossing threads was imperative so a special Stool holding Flasks filled with clear water around a single-Candle was used.  Tiny patches of Light, refracted through the Flask Lenses, all the Lacemakers had to be able to see by on Dark days.   The Lacemakers were not allowed to have a Fire because the threads had to be kept clean & untainted by Soot.  Instead, embers from the Bakery were placed in Chaddy or Dicky Pots beneath the Lacemakers Stools & Skirts with the added risk of setting Petticoats alight.

Lace is made on a Pillow with Bobbins marking each Thread.  We see Bobbins made by the local Bodgers called Thumpers which were used in Amersham.  Small off-cuts were used to make solid, bulky Bobbins each identifiable by their different Woods.  There were spotted, striped & ringed Bobbins. The finer Bone Bobbins from further North in Buckinghamshire had decorative squared-off Beads at the end and are now Collectors’ Items for the Lacemakers of today.  The Lace Patterns are pricked out onto thick Paper.  The outline edges of the Lace, made from shiny threads or Gimps are marked on the Patterns in Indian Ink.   Collars, cuffs, In Victorian times, Ladies often wore, pinned on their hair, a lightweight strip of Lace called a Lappet.

This Sculpture depicts a Bobbin Winder, Flash Stool, Bobbin stand & Fire Pot. The Cowper & Newton Museum, Olney. A photograph, taken in 1918 of a group of Lacemakers with those items (except the Bobbin Stand), all of which are on display in Museum.

Buckinghamshire Lace was fine & expensive.  The Makers were tied to one Dealer who supplied the Thread and the Patterns and then sold the Product. When the Dealers Fees had been paid the Lacemakers had very little from the London Trade.  Noted Dealers in Amersham were William Stalham, 1653, Daniel Anderson, 1690, Henry Hopper, 1721, Giles Child, 1757, William Morten, 1792, James Brickwell, 1823 & Isabella Brickwell who dealt until 1830.

Black Lace known as Amersham Veil, is recorded in 1792.  Making Black Lace really strained the eyes because the threads did not cast a contrasting shadow as they crossed over each other.  Fine Black Lace was exported to Paris for risque underwear.  Blond Lace was made in the Almshouses in Amersham and sent to London for Queen Victoria’s Trousseau.

The difference between Buckinghamshire & Bedfordshire Lace is a Historical rather than a Regional difference. Fine Lace, called Buckinghamshire Lace, could be copied by Machine in Nottingham.  The prices dropped and the Dealers went out of Business. But, by going to Malta, Dealers from Bedfordshire picked up new designs that could not be copied by Machine.  These designs became known as Bedfordshire Lace and extended Traditional Lacemaking, in both Counties by 50-yrs.

Lacemaking declined when Compulsory Education started. By 1880 children were making very little Lace and so were not acquiring the skills of fine work.  The thread was thicker, the work poorer, the designs coarser and the Lace did not sell, even at 6d a yard.

Embroidery, which included decorative beading.  Holmer Green became a centre for this work through the encouragement of Mrs King from Little Missenden.  She walked from her home to Holmer Green and acted as the Agent for the Village.  The Beading went to London’s East End.  Norman Hartnell bought Beading for the Queen Mother’s Dresses. When Debutantes “came out” their Ball Gowns were adorned with this Beading but that Market has now been replaced by the demand for Beaded Wedding Gowns in Greece.  Over the last 80-yrs Holmer Green’s skilled workers have gone through several phases of Embroidery Work.  Originally they made “Frogging” to hold the necks of Cloaks together.  This was Embroidery with Cord which was symmetrical about a Button & a Loop, again fashionable on the Cocktail Jackets of the 1950s. Beading work followed by “Tambour Beading” became the next skills.  Fine Beads are threaded onto the work in a Pattern.  A fine sharp-pointed needle which incorporated a tiny hook near the point was used.    During WW2, when resources were limited, “Roulé” work was done.  Thin strips of fabric were stitched, an easy job, and then more skilled workers linked the strips together with open-work Embroidery.  This was used to decorate the fronts of blouses.